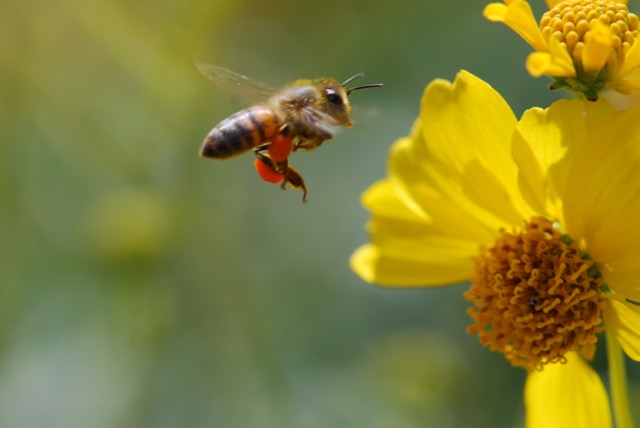 A honeybee is homebound from a wildflower bloom, dancing on the air, with pockets of pollen to kindle the hive and stroke the pleasures of their Queen. Keen to avoid selfish desire in the practice of devotion to the hive; this honeybee offers a medicinal allegory to remedy the trial-some aspect between two otherwise benefic planets; Venus and Jupiter.

The sweetness of Venus is floating through Leo, into an auspicious trikona aspect to a strong Jupiter posited in its own sign, Sagittarius. Venus will fully occupy the Purva Phalguni Nakshatra during this aspect, while Jupiter is comfortably within  the Purva Ashadha Nakshatra. Therefore, October 13th-23rd will be a time to consider the following:

In mythology, Jupiter is called Deva Guru, the advisor to the gods; sattvic in nature and thereby always rising, expanding, and uplifting energy into a spiritual alignment. Venus is called Daita Guru, the advisor to the demons; rajasic in nature thereby relating directly to outside world; the teacher of demons or titans, because to subdue and influence them cannot be achieved through force, but through charm and grace, of which Venus emanates. Make no mistake that these are two very positive energies in the cosmos, yet they are appointed as advisors to different planes of consciousness, and therefore do not always see eye-to-eye.

It is important to acknowledge the subtle discord of this auspicious aspect. Venus is transiting Leo, the sign ruled by our authoritarian Sun, a natural enemy to Venus. Venus is most comfortable in the dreamy waters of Pisces, the sensual body of Taurus, and the beautiful eyes of Libra; yet in the inferno of the fixed fire-sign Leo, Venusian desires can run hot, and the reckless abandon of a honeymoon-mindset can unravel a mountain of combustible lust, enveloping everything in its path like an avalanche of hedonistic indulgence. It is possible to drown out the tabor of Jupiters wisdom with rich foods, heavy drinking, loud music, bombastic sex, and large groups or parties during this transit.

However, desire is a very important indicator of ones dharma, the law of our inner-nature, which is the law of creative evolution and self-realization; but take caution against handing over the reins of your discernment to these cravings. Venus becomes a magnificent ally when the native allows desire to burn in the container of their life; rather than their life burning in the container of their desires.