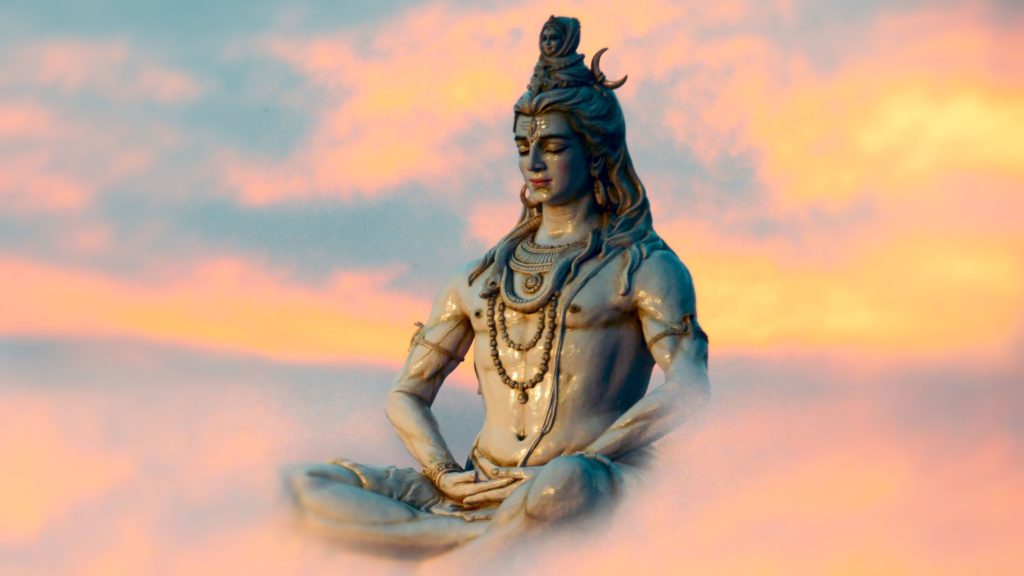 Maha Siva Ratri is a festival dedicated to the Lord Shiva, the cosmic creator and destroyer. Common practice is to stay up the whole night chanting mantras for Shiva, and offering fresh seasonal foods to Shiva. A Shiva lingam is a stone commonly used as an alter-piece and point of focus while chanting or making offerings to Shiva. It is smooth and phallic, and has a yoni at the base, representing a union of sexual organs, and gender. You can place the Shiva lingam in a basin or bowl, and pour water, infused with rose pedals, over the stone while chanting the mantra Aum Namaḥ Śivāya (pronounced aum-nahmah-shee-vayah).

Performing these rituals and offerings to Shiva will empower your yogic path, awareness of Reality, and journey toward radical inner-transformation. During Siva Ratri, the devotion to staying up all night in honor of these austerities will embolden the unshakeable quality to your spiritual practices and touch the deepest points of your center. Astrologically, chanting Aum Namaḥ Śivāya on this festival will benefit those in need of an uplifting remedy to an afflicted Sun. This affliction can manifest as having a clouded sense of purpose, incongruent reputation relative to who you truly are, or a lack of self-confidence and ability to lead others. More details for your charts can be seen through a proper astrological consultation.

The ‘Dark Moon’, or Amavasya tithi, is the point of the Lunar cycle just before the exact conjunction of Moon and Sun, creating the New Moon. Amavasya occurs roughly 24 hours before the New Moon, and is the apex of darkness in the night. There is no light reflected from the Moon, and it is still in its waning motion, meaning that an inward momentum is compelling you to tread softly and shift your gaze inwardly.

There is great power in fasting during Amavasya, as intaking food will introduce prana into your system at a time when darkness is at its apex and the obscured, shadowy components of the spirit are saturated in the ethers, which food and all matter is saturated in. Similar to fasting; meditation, journaling, or practicing a Kundalini kriya such as the Ego Eradicator can yield potent results today, and with a focus on the inward expansion, you will glide into the waxing tithis with a centered resiliency.

This New Moon will occur in the final degrees of Aquarius, in the Nakshatra Pūrvābhādra. This nakshatra is ruled by Ajaikapada (aja-ekapada), who can be seen balancing on one foot, and is represented with a funeral cot used before cremation. This quality of having one foot on the ground in this world, and another foot beyond this realm indicates that there will be a heavy processing of that which has come into our experience and also passed beyond it.

During a New Moon, we can glimpse the themes which will germinate and evolve over the next 30 days. Beginning with the nakshatra Pūrvābhādra, we see the fiery and transformative effects of Mars and Rahu conjunct in the fourth house of the home, in Taurus. This can be an omen for the many who have felt uprooted or redirected in their centeredness through the pandemic, which can be seen in Saturn conjunct Jupiter in the twelfth house of Capricorn, which is a moveable Earth sign, indicating that with steady and sure-footed motion, we very well may be rounding the corner this Spring.

Now many are beginning to catch a glimpse of what life may look like in a less regulated world during the global pandemic response. Yet during this New Moon, we can pause and hold space for those affected through loss, and allow the grief to work through our body into acceptance, and deep compassionate love. It is important to remember that the universe never works against you, and that it only works for you. As difficult as broadening the perspective can be while we are berated with reminders of the stresses in the day-to-day world, it can be healing to remember that your soul has chosen this lifetime to be born because of the unmatched opportunity for growth and evolution which this life holds as we process and transform our personal karma.