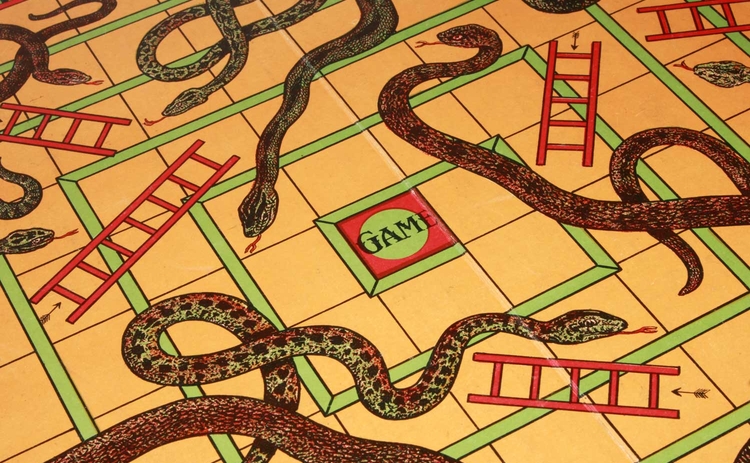 Kala Sarpa Yoga
There is a myth to connect with Rahu and Ketu, teachers of deception, loss, drive, poison, and medicine. In the beginning of time, Vishnu was sharing an immortality potion with the planets, gods, and goddesses to allow them to care for the newly birthed universe. A snake-demon snuck into the line wearing a disguise, and hid between the Sun and the Moon. After a drop of the potion reached the demons tongue, the Sun and the Moon yelled out that this was a demon! At once, Vishnu sliced the serpent in half. However, already having tasted the immortality potion, the two severed halves of the serpent now live immortally in our sky, and forever seek revenge by attempting to swallow the Sun and the Moon…although without a body to digest, they come out the other side each time. Rahu and Ketu correspond to the lunar North and South node respectively, and without physical bodies like the other planets they are known as shadow planets, special points which indicate eclipses astronomically.
As Northern and Southern lunar points, Rahu and Ketu will always exist exactly 180 degrees apart from each other in the sky. Kala Sarpa Yoga is a time when every planet in the sky is stationed in between this arc of Rahu and Ketu. With Rahu in Taurus and Ketu in Scorpio, this means that the Sun, Moon, Mercury, Venus, Mars, Jupiter, and Saturn are all in signs between the nodes. This yoga is ramping up in intensity from January 11–25. As the signifier of reincarnation and liberation, Rahu and Ketu relate to karma. What this means is that karmic interplay will be much harder to overlook, often times feeling like your fate comes down to the roll of a dice; you may move 3 steps forward, only to slide 8 steps back. You may also take one step forward and find yourself on a fast track to success beyond what felt attainable, only to lose what you gained so effortlessly.
The piece of advice in general to make the most of Kala Sarpa Yoga is to maintain an even disposition, not getting too hot or too cold with what life has in store. Take accolades and criticisms with the same emotional response. Riding the waves will be an unavoidable experience, but taking control of what you can control, and rooting yourself to a stoic emotional state will provide a tether to keep you grounded. And once the skies clear, you may be more capable than ever before to seize the opportunities by January 26.
Exalted Moon, Jan 22
The Moon will be in its favorite place of the Zodiac, the first three degrees of Taurus where it becomes exalted on January 22. We are supported in finding mental ease, bliss, yoga, self care, nurturing others, singing, cooking, swimming, and painting with water colors. Relationships will light up deeper connection points, and moodiness will be more tempered, to a degree depending on your personal birth chart.
Namaste!
Reference:
1) www.timelineastrology.com
Image credit: www.risk.net