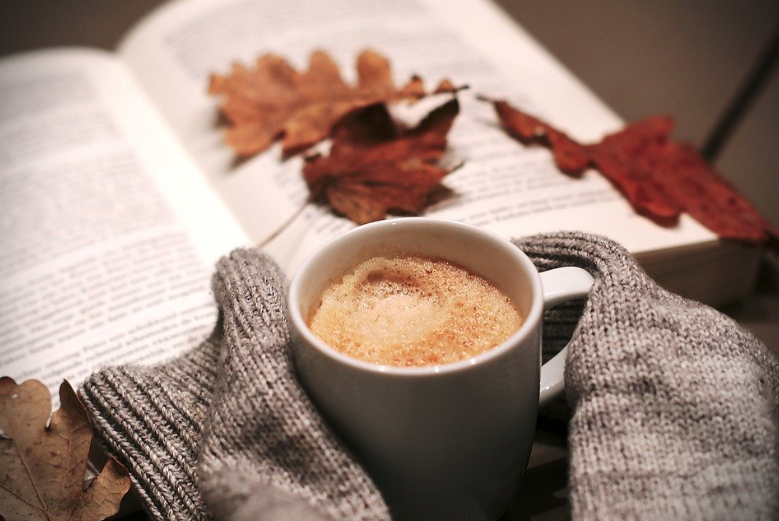 For those of us who haven’t been able to get warm in days, or who have been eating tons of squash and root vegetables, we’re aware that the seasons are changing. In Ayurveda, the season or phase of year we’re currently in is either a ritu (fixed season) or a ritu sandhi (in between seasons, juncture, meeting place).

Right now (mid-November), we’re in a ritu sandhi, as it’s autumn turning towards winter, and we are in the phase between autumn and winter. What does that mean—to be in between? On the most basic, general level, it means to be somewhere unfixed, between two fixed points, holding space for the qualities of both and for something entirely other. So what does it mean for us to be in between the autumn and winter seasons?

Basically, it means that the winter harvest is not quite at its peak, and the autumn harvest is not quite over yet; the weather is not quite bitter cold, and leaves are not quite done falling from branches. It means that our bodies are transitioning out of the needs, energetics, and qualities of late summer/early-mid fall, and preparing for those of winter. This time period is easily dismissed, as it goes by quickly; but, if we can approach the transition consciously, Ayurveda tells us that our bodies will be much happier and well-adjusted every step of the way.

We can set ourselves up for physiological and emotional success each time the seasons change just by understanding the various qualities and properties present, and by following some basic guidelines informed by the natural world around us, to keep healthy. When we gradually shift with the seasons instead of drastically shifting, we can properly close out, move on from, let go of and grieve all that we experienced in the months prior (the season we’re moving away from), and integrate all of those experiences, nourishments, and feedback into the present moment. Then, we can take with us only what will serve us moving forward, and leave behind habits or behaviors, clothing and foods, that won’t be relevant or supportive in the coming season. Being in touch with these transitions gives us a foundation for life where we’re more easily able to accept change, impermanence, and moving forward even when it means letting go of something (or someone) we love or starting over from scratch. It also gives us a doorway into ritualizing (or making sacred) how things change around and within us. Making time to celebrate and honor the seasons when they change gives us the ability to slow down and celebrate and honor what’s changed within us over time. Without stopping to take stock, we can easily get overwhelmed or caught up or stuck in habits and patterns that once served us and now hold us back.

So let’s look at some of the qualities, according to Ayurveda, of autumn and winter.

In Ayurveda, autumn is considered a vata season—dry, cold, windy, rough, changing. We want to be eating less bitter, pungent and astringent foods that can aggravate vata, as there is already so much vata energy present (see our previous articles on the six tastes to better understand those flavors/foods). It’s recommended that we start incorporating more cooked foods like soups, stews, porridges, and slowly stop drinking cold juices and smoothies that are, for a lot of us, a summer staple. Abhyanga (self-massage, or massage with a practitioner, using Ayurvedic-herbal oils) starts to take on a new meaning as the weather changes to a colder, windier, more unpredictable temperament, and that sort of soothing touch can bring us the kind of warmth and rejuvenation we might really need to feel stable, grounded, soothed during this transition. Things like poached pears, pumpkin or squash soups, vegetable soups and stews, kitchari, roasted vegetables, baked apples, and porridge are all the kinds of foods our bodies will benefit most from during this season. Gradually adding more foods like that into our diet and eating fewer raw salads, fruit salads, smoothies and juices from the warmer summer months are great ways to stay in tune with the seasons and keep your body happy during this time of change. Autumn/fall is a season of letting go, as the leaves fall off of branches and many plants in the garden finish up their growth for the year. It’s a time of building and fortifying, and we see that exhibited in the world around us too—squirrels collect extra acorns, squash grows in abundance (very hearty, nutrient-rich foods that fortify and strengthen our bodies), and the cold weather is just cold enough to feel rejuvenating (unlike winter, where it can sometimes feel harsh and bitter).

Winter is a Kapha season with strong vata undertones; this means that the energetics of winter are more grounding, slow, restful, and calm. When the sun is at its peak in summer, our digestive fire is at its lowest point—the energy and strength of the sun nourishes and cleanses us, and our bodies need less food as fuel. In the winter, when the sun is low and at its weakest point, our own digestive fire kicks back in. We need more warm, cooked (pre-digested) foods to help the Agni (digestive fire) reboot, and to sustain us and keep us energized during the slow, grounding, quiet vibe of winter. Good healthy fats (like ghee), home cooked soups and stews and hearty dishes can help us keep our focus and feel replenished from the energy we expended throughout summer and fall running around outdoors, being more social, or doing anything else high-energy that feels more natural during summer/fall than in winter, etc.

We want to keep spices well balanced, as eating too much pungent or bitter or astringent foods during the winter (or fall) can aggravate vata and kapha. Spices like giner, turmeric, cardamom, cinnamon, clove and black pepper are great in moderation during this time of year. Cooked grains like oatmeal, polenta, barley, kitchari, rice, are all great options and give us hearty, lasting energy to get through the harsh winter months. Steamed vegetables, soups, a little extra egg, chicken, rabbit or venison (if you eat meat) can keep us strong and feeling good.

In Ayurveda, each ritu-sandhi technically lasts for 14 days as it connects the ends of two different seasons. To be in transition is a pivotal time, because (as mentioned above) it can provide us with a reference point to check in with ourselves and the natural world, to adjust habits, routines, dietary practices, behaviors, and make choices more in alignment with who we are and where we are in life; we’re always changing, and to be in touch with the way things change, and to allow ourselves to adapt and be present with change is one of the greatest gifts we can give ourselves. If we try to hold on too tightly to the way things used to be, the way we think things should be, etc., then we miss out on a lot. We can even go so far as to become discontent with the present moment, with life as it is—on superficial levels (how we look, what job we have), on environmental levels (tired of winter, wishing it would stop raining), and on deeper levels (personality traits, who we are, how we feel). Ayurveda is a system of healing based on (among other things) acceptance, change, flexibility, and agility; it teaches us how to be present and non-judgmental while we cultivate the ability to discern information, recognize changes/patterns, and learn from nature.

It sounds so simple—to be in touch with the seasons as they change, but it’s really hard to do. It’s hard enough to be present in the moment, and then to ask ourselves to be present and attentive to what we’ve been though in the previous months (a season) is an extra layer that requires additional time, conscious reflection, honesty, and willingness to slow down and remember. On a physiological level, it’s important to make time for this because it can be shocking for our bodies and nervous systems to go from a certain way during one season and then switching things around in the next. We definitely want to change up our diet via eating seasonal foods and working with specific tastes that support different parts of the body during different seasons, it’s just that Ayurveda teaches us to do it gradually and not shock our system.

For example, Ayurveda suggests that we eat little to no pungent, spicy, and sour foods in the autumn season; and if we love those foods, it can be really hard to give them up or eat less of them during this time, especially when we think eating pungent foods will help warm us up from the onset of cold weather. To make gradual changes, we can shift from eating things like hot sauce or cayenne pepper only a few times a week instead of every day. For more specific information about what foods your body will respond well to during the seasonal in-betweens and the seasons themselves, schedule a consultation. General guidelines are helpful, but the human body is so unique and specific. And even though it’s easy to downplay the significance of food and taste because we eat multiple times every day, it’s true that food is medicine. And it’s life-changing when we treat it that way.

On the emotional level, it’s not easy to be present with how we’ve felt, how we’ve grown, what we’ve learned, and wish we could have done differently all from a place of non-judgment and flexibility. But to be in touch with the changing of the seasons is to be in touch with that part of our own nature, the part that is imperfect, impermanent, always moving through cycles and adapting to find a more balanced approach. So even though it isn’t always easy, it’s important to take time during the transitional phases to sit down with your journal or a friend and talk about what that previous season meant for you. What did you accomplish? What do you wish you had been able to accomplish and how can you start taking actions in the coming season to get closer towards that goal? What foods have you been eating and how has your body been feeling? In what ways can you nourish yourself more fully in the season coming up?

Those are all some examples of possible ways to reflect during the in-between-ness of the year. The transitional phases, ritu-sandhi’s, are six in total according to Ayurveda.

The Ritu-Sandhi’s, or seasonal junctions between the four seasons, according to Ayurveda are:

And they all have varying qualities, and suggested foods and practices that go along with them. Some general guidelines for this in-between of autumn and winter, and for the winter, are:

Let us know if you have questions during this transitional time. We’re here to support you!